So as promised, here are the swatches of the 4 NEW LIMITED EDITION (like what I did there…with the CAPS key?) Maybelline 24 Hour Color Tattoo swatches & review! WOO! I’ll have comparisons up of all the tattoo swatches soon as well since I’ve picked up some more. To see swatches of the 6 original shades I began with (including Bad to the Bronze which is the only repromote in this display) then check out my Maybelline Color Tattoo Swatches & Review post from February.

Clearly the the shades offered here are lovely & I am SO sad they are Limited Edition. Maybe they will change their mind? I love these as bases & also to wear on their own…no primer necessary. Why do I wish these were permanent? Because I use neutrals like nobodies business.

These 24 Hour Color Tattoo shadows from Maybelline (along with some Milani Shadow Eyez Pencils which I MUST swatch since they last just as long…ahhhh off track!) are my GO-TO products for nights out. Lately we’ve been bowling, mini golfing, & playing laser tag. It might not seem high energy but we’re competitively rambunctious so its actually a pretty decent workout. Shockingly, I don’t like to end the night looking like a wet cat & these still look flawless by the end.
So how do the new shades stack up?  All swatches are WITHOUT primer & the photos have NOT been edited except for using flash in some.

100 Barely Beige: A shimmering beige nude.
Although this might appear to be more of a champagne, I assure you it isn’t. This is probably the most wearable of the 4 & probably the one I’ll use most. Inner corners, browbone, base, main shade…this can pretty much do it all. It swatched so easily & really drew the light.

200 Mossy Green: An olive-toned mossy green with a golden shimmer.
The gold here isn’t like the L’Oreal Infallible Golden Emerald shadow at all where its like BAM GOLD its more of a light green. This one is the only color that I had to swatch twice (one atop another) because it just didn’t swatch perfectly. This is thinner & went on patchy. Needs improvement.

300 Gold Shimmer: Bronzed darkened gold that comes off somewhat metallic.
This almost has that antique coloring to it. It looks more bronzed/antiqued when placed next to a straight gold. Pigmentation & application were perfect.

400 Rich Mohogany: A deep, rich brown with red shimmer.
Gorgeous & so unexpected. The red shimmer actually does translate on my eye looks although some bloggers disagree. Me, I probably pile it on more so maybe that’s why its more noticeable? I didn’t have issues with this shade although some others also say this one is patchy.

SWATCHES: left to right we have Rich Mohogany, Gold Shimmer, Barely Beige, & Mossy Green. First photos are in the shade last are in natural sunlight.

In the end, I’m glad to have all 4. I am DETERMINED to make Mossy Green opaque on the eye while looking fab because I’m such a green freak. & really, isn’t this the perfect transition green for both fall & winter? Barely Beige is perfection. Seriously. What more can I say except I plan to vastly overuse it? Gold Shimmer is pretty & will be a great liner although I wish they had put a plum or navy instead since we already have one gold shade from the previous line & the purple just doesn’t work well for me on its own. Still, its a beautiful shade & it will definitely get used. Rich Mohogany was definitely unexpected since I only thought it was kind of a chocolate brown from some less detailed swatches. I actually love the addition of the red flash of shimmer which gives it such a rich & distinct look. Plus, bronzes are a blue eyed girl’s best friend.

These are just as long wearing, creamy, & dreamy as their predecessors. Also, now I just want these to be permanent & for Maybelline to continue feeding the addiction. These have been popping up at Walgreens, CVS, & Rite Aids across the country so check out your local stores! I’m honestly not sure about other countries but if they’re in yours too, feel free to let me know in a comment below!

These were much requested after my first swatches were so widely accepted. I am very happy I picked up all 4 even if  I’ll have to work with Mossy Green a bit. What do you think? Will you be seeking all 4 or just a few?

More from All Things Beautiful XO: 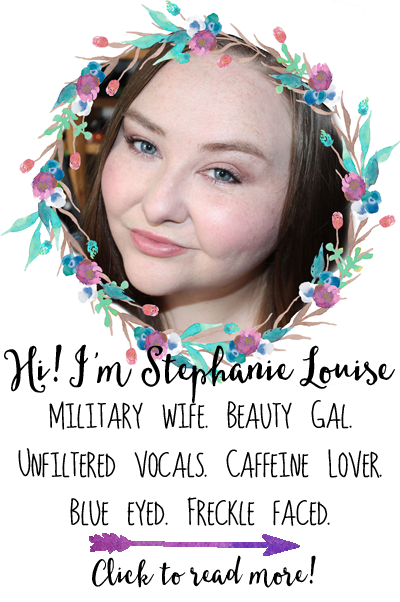 Tweets by @StephLouiseATB
Load More...
Follow @stephlouiseatb
This blog at times uses affiliate links, sponsored material, & receives some products as samples in hopes of review. This in no way alters the articles/posts written & all opinions are my own or that of a guest writer. Please see my disclosure tab above header for more info.